Steven Johnson Syndrome is an autoimmune reaction that the body has to certain drug metabolites.  As the drug breaks down into molecules in the body, the molecules attach to skin and mucous membrane cells and trick the body into thinking that these cells are foreign to the body.  Since the immune system no longer recognizes affected skin and mucous membrane, it attacks and kills the cells.  As more metabolites are available, more cells are killed causing an injury that is akin to a burn.  If the offending medication is continued, it is like pouring gasoline on a fire and the damage to the skin and mucous membranes becomes widespread and severe.

SJS presents itself first as the flu, with fever, chills and lesions on the epidermis, the outer layer of the skin. As more cells are affected, these lesions begin to grow, and cause the skin to peel off in large pieces, leaving patients susceptible to infection, and scarring.  SJS also affects the mucous membranes, which can result in blisters on the  cornea of the eye, scarring, holes in the cornea  and blindness. It can also affect the mucous membranes of the mouth, throat, airways, urinary tract, vagina and anus. SJS is a life threatening disease because of the severe damage it can cause to the skin and mucous membranes.  If allowed to progress, and the lesions cover over 30 % of the body, the patient is categorized as suffering from toxic epidermal necrolysis, or TEN, the continuum and most severe form of SJS.  Over 30% of the patients who are diagnosed with TEN die from this condition. 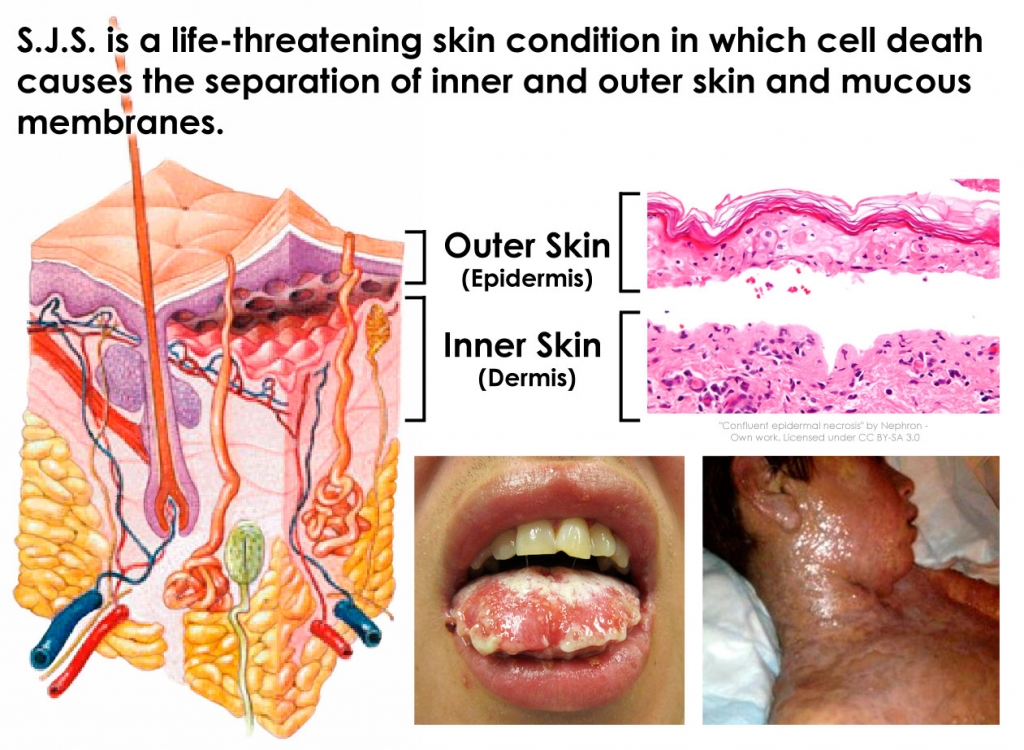 SJS and TEN are almost always triggered by medications.

What Medications Can Cause SJS?

Medications are the leading trigger of SJS/TEN in both adults and children. The risk of SJS/TEN seems to be most prevalent during the first eight weeks of treatment. The typical exposure period before reaction onset is four days to four weeks of first continuous use of the drug.

All of these medications carry with them an FDA warning to prescribers giving them notice of the risk of SJS/TEN.  This is because early diagnosis and discontinuation of the offending drug is the key to a good recovery.

SJS usually presents with a fever often exceeding 39°C (102.2°F), and influenza-like symptoms precede by one to three days the development of mucocutaneous lesions. Signs and symptoms that should alert the clinician to the possibility of SJS/TEN include fever >38°C (100.4°F), mucositis, skin tenderness, and blistering.  Mucosal involvement occurs in approximately 90 percent of cases of SJS/TEN and can precede or follow the skin eruption. Eye involvement is reported in approximately 80 percent of patients. The most common change is severe inflammation of the eye with a purulent discharge and blisters may develop. Pain and sensitivity to light are often present.

In children, the medications most often associated with SJS/TEN are sulfonamide antimicrobials, phenobarbital, carbamazepine, and lamotrigine. Cases associated with acetaminophen/paracetamol (Tylenol) and ibuprofen have also been reported.

Although Steven Johnson Syndrome is rare, the lawyers at Feldman & Pinto have extensive experience prosecuting cases for clients nationwide.  Our lawyers have pursued cases against the drug manufactures and prescribers who have failed to discontinue the offending drug once SJS symptoms have appeared. 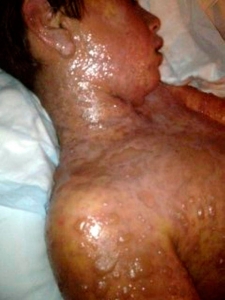 One such case involved a six year old child who was taken to the ER by his mother after complaining about a headache that lasted three days along with a temperature of 102 F. Prior to this ER visit, the child had been given Motrin at school. At the ER, the child tested negative for strep throat and other urine testing. He was diagnosed with a viral infection and sent home with directions to take Tylenol/Motrin every four hours as needed for his fever and pain. As instructed, the child’s mother administered Tylenol/Motrin around the clock for two days every four hours.

When the child failed to improve his mother took him back to the same ER. Upon arrival, the child had very dry lips, a sore throat, and a headache. The child’s physical examination reported very dry mucous membranes, numerous oral ulcers, exudate on tonsils bilaterally, oropharynx erythematous and ulcers along the gum line and lips. The child also had purulent discharge from both eyes and was unable to take liquids.

Despite considering SJS as a possible source of the child’s symptoms, and an FDA warning to the physicians to discontinue Tylenol/Motrin, if the patient suffers from skin reddening or rash, the medications should be immediately discontinued, the physicians continued to administer Tylenol and Motrin to the child.   Both Tylenol and Motrin have been associated with SJS and carry an FDA warning regarding SJS and direction to discontinue the medication and seek medical attention if a skin reaction develops. Every dose of the culprit drug increases the amount of metabolite in the child’s body and causes more damage.

Feldman and Pinto are representing SJS cases nationwide, referrals are being accepted for cases involving SJS/TEN. If you feel like you haven’t been treated promptly, please contact our office to see if we can be of any help.

If you are looking for a Philadelphia Medical Malpractice lawyer, contact Feldman & Pinto for a free evaluation today.

The Institute of Medicine estimates that more people die in a given year from preventable medical errors than in car accidents, breast cancer or AIDS. Preventable medical mistakes kill 192,000 patients a year in the United States and injure many others.