Berks County, Pennsylvania, may be entitled to recover damages from prescription opioid manufacturers and marketers in Berks County, PA opioid litigation. Berks County has sustained serious losses as a result of the expanding opioid epidemic. According to U.S. Drug Enforcement Administration (DEA) data, Berks County (total population 411,442) experienced a 69% increase in overdose deaths from 2015 to 2016. Most of these overdoses were from opioids heroin and fentanyl. See DEA Analysis of Overdose Deaths in Pennsylvania, 2016, (U) Appendix Figure 15. The Berk’s County Coroner’s Office also reported that 261 drug overdose deaths from opioids fentanyl or heroin occurred in the five-year period from 2013 through the end of 2017.

Berks County reported 342 overdose deaths between 2014 and 2017. The majority of these involved opioids fentanyl and heroin.

Cause and Recovery of Berks County
Opioid-Related Costs

The unscrupulous and illegal marketing of prescription opioids by prescription opioid manufacturers has caused a nationwide epidemic that has reached Berks County and other Pennsylvania counties. False advertising and overly aggressive sales tactics have caused prolific opioid dependency and abuse, burdening Berks County with excessive costs related to the opioid crisis within its borders.

Governmental entities throughout the State and country have commenced legal actions against prescription opioid producers, seeking damages for losses associated with opioid addiction and abuse. To streamline the discovery and pre-trial phases of federal opioid cases, an MDL (Multidistrict Litigation) was formed on December 5, 2017. All federal cases brought by governmental entities such as Berks County will be filed in the MDL court in the Northern District of Ohio.

[See Pennsylvania Opioid Government Litigation Lawyers for additional details about the economic burdens of the opioid epidemic, causes of action, and recoverable damages.] 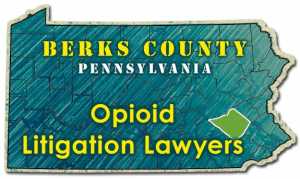 Feldman & Pinto, P.C., is a Philadelphia based personal injury firm concentrating their practice in pharmaceutical litigation and medical malpractice. We are part of a team of lawyers engaged in a fight to compensate local governmental entities for costs incurred as a result of the opioid epidemic.

Please contact us to inquire about the possibility of commencing Berks County, PA opioid litigation.

This litigation seeks compensation from prescription opioid manufacturers and marketers for these non-individual entities for excess costs incurred as a result of the opioid epidemic.